I finished the dissertation at 5pm this afternoon, bells and whistles and all of that.

As of right now, I have another 3,000 words to write for this experiential project essay, and I intend to finish it before going to bed tonight, so I can e-mail the whole package to the printer before the sun rises upon Oxford. That leaves two full business days for them to get it done up and have it ready to be picked up by a friend on Friday morning.

Update. 02:14hrs. The .pdfs have been sent to the printer, and my kind colleague Jacob will be picking them up for me, and adding the official documents my supervisor had to scrounge up at the last minute (some things you should never, ever lose) and deliver them to the exam schools by Friday at noon.

I'm going to bed. Then I'll get up, have my coffee, and call the printer after lunch (their time) to confirm the order and pay for it. Then I'll sit and try to figure out what the heck I'm doing with my life now.

Other than sitting for the viva voce exam at the end of November...! I'm really anxious to return to Oxford, so that will be nice.
Posted by Kyle at 11:11 PM No comments:

I'm afraid Kitty's getting bored with his toys. I think when I finish my paper, I'm going to go to the pet store and get him a hamster to play with.

Oh, and kill and eat.

You can read Kitty's other sagas by clicking here.
Posted by Kyle at 10:28 AM 2 comments:

If I move to a different church because I think my present church is too consumer-driven in its stories and practices, does that make me a hypocrite?

"Theological training is overrated. What makes the real difference to your theology is your personality type rather than what you're taught. For instance if you're a divergent-minded and progressive free thinker, you're far more likely to be an Arminian, whereas if you're a thick-headed, hardcore, everything-is-black-and-white humourless zealot with Asperger's syndrome, you're far more likely to be a Calvinist."
Posted by Kyle at 11:00 AM 2 comments:

Rich Mullins on the Bible 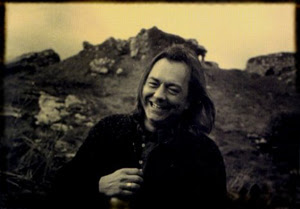 Rich Mullins' memorial is coming up on 19 September; do yourself a favor and check out any of his albums. The synthesizers on the first album are nuts, but the rest is okay, and the poetic lyrics are amazing.

"The Bible is not a book for the faint of heart. It is a book full of all the greed and glory and violence and tenderness and sex and betrayal that benefits mankind. It is not the collection of pretty little anecdotes mouthed by pious little church mice. It does not so much nibble at our shoe as it cuts to the heart and splits the marrow from bone to bone. It does not give us answers fitted to our smaller minded questions but truth that goes beyond what we even know to ask."

"I don't think you read the Bible to know truth. I think you read the Bible to find God, that we encounter Him there. Paul says that the scriptures are God's breath and I kind of go, wow, so let's breathe this as deeply as possible. And this is what liturgy offers that all the razzmatazz of our modern worship can't touch. You don't go home from church going, 'Oh I am just moved to tears.' You go home from church going, 'Wow, I just took communion and you know what? If Augustine were alive today, he would have had it with me and maybe he is and maybe he did.'"

It's now going to be legal to sell alcohol by the package in Lexington on Sundays. On December 16th.

'Cause it wasn't before.

The funny thing was, the fundamentalist Baptists who showed up to argue against it are essentially prohibitionists - they want to outlaw alcohol any way they can. Their arguments seemed kind of strange when the city was considering expanding the existing alcohol sales, not cutting them off.

They said expanding Sunday hours would lead to more alcoholism, alcohol-related crashes and hungover employees who would not arrive to work on time on Mondays. It would also lessen the respect for the Lord's day, they said.

Lemme tell ya - as it stands, Sunday's the only day I'm sober - and that's gonna change real soon. See the thing is, alcohol goes bad if you don't drink it the same day you buy it.

Huh. Okay, so that's not true at all. You mean I could have been tanked at the last church picnic! What a terrible law.

I'm at LTS today, looking to sort out how I'll describe these "anti-imperial" stories the Church must tell. As some of you will know, this Disciples of Christ seminary now houses the Baptist Seminary of Kentucky, and a sign outside indicates this.

A couple of older gentleman strolled in and asked the library desk worker if this was a Baptist seminary now. She looked like someone had stolen her lunch money, and tried to explain to them what the Baptists were doing here.

When I returned to my table, I noticed that the bust of Alexander Campbell on the windowsill was weeping.
Posted by Kyle at 12:23 PM 1 comment:

I once got a lecture from a family member about how things would be different once I was out of school and in "the real world" and had to look after myself.

(I don't know who she thought paid my tuition bill.)

The funny thing was, at the time, I was in a wheelchair because I'd just broken my neck/back/ribs/sternum, and my mother was feeding me soup because I couldn't do it myself. Or chew very well. Or go to the bathroom myself. Or lie down. Or sleep.

And I thought to myself, "Man, I'm glad I'm not out there in the real world. Things must be pretty fucking tough out there."

I'd have been angry if it wasn't so ludicrous.
Posted by Kyle at 4:05 PM No comments:

How to Shop for Churches

The other Kyle can't go with us to afternoon Mass at St. Patrick's Church because of his work schedule. In the meantime, we've been sniffing around for a service of divine worship that he might attend on Sunday mornings. There's a local, large Reformed church that I'd heard good things about (in regard to its liturgy), but when I asked a friend who attends, his first comment was that the preacher really loves to talk about homosexuality and abortion, which surprised me. That's probably not a congregation any of us is going to get excited about.

I mean, what business does a pulpiteer have talking about abortion or homosexuality of nobody in the congregation is doing or about to do those things? Why is it interesting? Why is it important? Are preachers at these large evangelical churches really pacing back and forth talking about how non-baptized people should live?

That's not to say that anybody wants to attend a mainline denomination so they can hear about the war in Iraq, either...

Will and Michael have commented on the Imperial Administration's expanded regulations to encourage mountaintop removal in Appalachia.

Here's a quote from Wendell Berry I came across the other day.

"Despite its protests to the contrary, modern Christianity has become willy-nilly the religion of the state and the economic status quo. Because it has been so exclusively dedicated to incanting anemic souls into Heaven, it has been made the tool of much earthly villainy. It has, for the most part, stood silently by while a predatory economy has ravaged the world, destroyed its natural beauty and health, divided and plundered its human communities and households. It has flown the flag and chanted the slogans of empire. It has assumed with the economist that 'economic forces' automatically work for good and has assumed with the industrialists and militarists that technology determines history. It has assumed with almost everybody that 'progress' is good, that it is good to be modern and up with the times. It has admired Caesar and comforted him in his depredations and defaults. But in its de facto alliance with Caesar, Christianity connives directly in the murder of Creation. For in these days, Caesar is no longer a mere destroyer of armies, cities, and nations. He is a contradictor of the fundamental miracle of life. A part of the normal practice of his power is his willingness to destroy the world. He prays, he says, and churches everywhere compliantly pray with him. But he is praying to a God whose works he is prepared at any moment to destroy. What could be more wicked than that, or more mad?"

Fr Matthews keeps telling me about this "Protestant Reformation" business. In response to some things I said last week, he wrote a post confessing that he believes in the "Reformation version of justification by faith." The thing is, I know lots of self-identified "protestant" Christians who wouldn't use the language that the good father does. Ever. Under any circumstances.

This suggests a couple of things to me.

First, just because a contemporary Christian says that they consider themselves to be heirs of the Protestant Reformation doesn't mean their words about God and the Faith have anything in common with those of the Reformers. I'll take Pete's word over any random 50 Protestant laypeople or preachers you'd like to present to me, quite frankly.

Second, I really need at some point to take seriously what I've read and heard about the Reformers seeking to return to the Bible and the Fathers. To the extent that contemporary Protestants have forgotten that last been, I suspect they've co-opted the Reformation for own uses. I'm sure it happens all the time.

I think when I get this thesis done, I'll start thinking about such things.

Don't get your hopes up, though. I'll still probably think "formalism" is a positive label...!
Posted by Kyle at 11:15 PM No comments: