Have you ever listened to somebody long for purer, simpler times? You know, when Western Civilization wasn’t crumbling around us? I took a history degree, and it’s my considered opinion that it’s always been crumbling. Pick out bits of literature from any given generation, and you’ll find laments about how the younger generation was going to destroy them all.

Here’s a bit from Tom Ehrich, though I do recommend that you read the whole piece.

Having experienced the 1950s, both as idyll and as truer stories encountered later, it perplexes me when that decade is held up as a golden era, a model of what modernity ought to be, as though everything would be right in the world if we reclaimed neighborhood schools, restored women to the kitchen and male dominance in the workplace, if churches "got back to basics," if diversity and immigration could be discouraged. And everything were made simple again.

It wasn't simple then.

It only seemed simple because we were children. In fact, the 1950s were as odd in their own right as subsequent decades, the only difference being that post-war Baby Boomers experienced the 1950s as children, the 1960s and 1970s as adolescents, and the years since then as adults vulnerable to uncertainty.

Besides, not all Americans in the 1950s were safe and serene, as gossamer stereotypes insist. Many experienced the '50s through Jim Crow laws, broken marriages, unacknowledged incest and alcoholism, an artificially induced arms race and pillaging by the wealthy, which would bear horrific fruit in later decades.

The retro yearnings of our day claim to be a search for better ethics, better religion and better citizenship. In fact, they are a search for lost childhood.

We were young, naive and safe. We lost that seemingly golden era, not because communists, secular humanists, moral relativists, situational ethicists, Presbyterians, hippies or liberals stole it from us, but because we grew up. And no amount of anti-modernist yearning will put Humpty together again.


From the Texas Baptist Standard
Posted by Kyle at 5:02 PM 1 comment:

Nothing Could Be Closer to the Truth 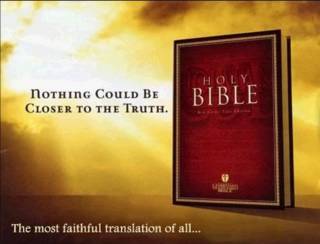 Please notice my new slogan. Please note that it's not a proclamation of my exegetical infallibility (I'll let you conclude that on your own) but rather a parody of something almost as ridiculous.

Check this out: The Holman Christian Standard Bible. All of the translators came to the Greek and Hebrew texts with a pre-existing doctrine of the Scriptures called "Inerrancy." Aside from being a silly idea, it is a recent invention, and in my not-so-humble opinion, a product of Enlightenment thought. I will craft a polemic on this some other time.

But because of this doctine, the Holman CSB carries this slogan: "Nothing Could Be Closer to the Truth." Instead of trying to avoid particular sectarian biases, the publishing arm of the Southern Baptist Convention as made it an attractive marketing point.

The SBC has joined the ranks of the Latter-Day Saints, the Jehovah's Witnesses, and the Roman Catholic Church in producing their own denominational bible translations.

And the Holman CSB is wholeheartedly endorsed by Pat Robertson.

So with that said, I present to you, "Captain Sacrament: Nothing Could be Closer to the Truth."
Posted by Kyle at 1:49 PM 18 comments:

God bless those early writers and their blunt instuments:

We hold communion with the apostolic churches because our doctrine is in no respect different from theirs. This is our witness of the truth.

It is unlawful to assert that the apostles preached before they possessed "perfect knowledge," as some do even venture to say, boasting themselves as being improvers of the apostles. For after our Lord rose from the dad, the apostles were energized with power from on High when the Holy Spriit came down [upon them]. They were completely filled and had perfect knowledge. They departed to the ends of the earth, preaching the glad tidings of the good things sent to us from God.

The Word "Love" Is Inadequate

At some point in recent Episcopal history, the innovators, who were now much more interested in new morality than new theology, starting dropping all their
prophetic, ground-breaking, barrier-breaking, new world exploring rhetoric -- the rhetorical mode that had sustained skeptical Christianity for the 20th century, most used, or most loudly declaimed, in the 1960s and early 70s -- and started talking about themselves as if they were perfectly orthodox believers. I suspect the same happened in other mainline denominations.

This, they obviously thought, would provide some excuse for doing what almost everyone recognized as ground-breaking and barrier-breaking, if not (opinion was divided on this) prophetic and new world exploring. Some felt that the barriers being broken were like corsets oppressing women yearning to breath free, others that the barriers were like guardrails keeping reckless, foolish, inattentive, or suicidal people from driving their cars into the Grand Canyon.

The liberals' problem was convincing everyone else that what had once been universally held to be wrong was now as mainstream as American cheese in suburban Sioux Falls, Iowa, and as bland and inoffensive as beige carpets. Hence the appeal, which the Rev'd Ms. Russell adopts, to a high but abstract principle derived from a Dominical teaching taken out of context.

Thus the moral innovators could claim to be "biblical," because the principle to which they claimed allegiance was indeed found in the Bible, without having to trouble themselves to find, or to obey, what the Bible actually said. Making the word "love" the sole authoritative principle without further definition destroys all possibility of reason, and therefore of challenge.

The word by itself suggests wisdom, insight, sensitivity, even godliness, but by itself means nothing practical, nothing specific. It is a bag into which one can put anything one wishes and get it through customs, a get-out-of-jail-free card any criminal can use, a magic wand that makes all problems disappear. [emphasis mine -kp]

Except that what Ms. Russell calls absolutism, fundamentalism, and puritanism simply articulates what the Bible tells us about reality. More to the point, it articulates what God has graciously told us about reality because on many matters, like the nature and exercise of sexuality, we don’t want to see what we should see, what is indeed right in front of us. We need the details, not just general instructions to “love.”

The Problem with Sola Scriptura

The translation and interpretation of Holy Scripture is the task of the Church brought into being by the same Holy Spirit who inspired the written Word. The protesters who broke with Rome cannot have foreseen the fissiparous nature of their enterprise. In rejecting the authority of the Pope the Western reformers did not abolish autocracy but rather set in train a process the logical end of which is that every man is a pope in his own parish or in his own front room. The ‘idolatry’ of Rome was replaced by the idolatry of self, social group and nation in swift order. Reformation hopes gave way to puritanism. Parts of Europe descended into the fierce joylessness of Calvinism, others to the excitements of Anabaptism, revivalists, iconoclasts, Pentecostalists etc, each seizing upon an aspect of the faith and overemphasizing it to the distortion of the whole. The upshot is hundreds of ‘churches’, most of them with their own bizarre subdivisions (low, strict and particular, Southern, open etc, etc). In addition, there are thousands upon thousands of one-man band conventicles brought about by the falling out of Brother Smith with Pastor Jones. Pastor Smith, as he has now appointed himself, has the ‘real’ truth and hopes shortly to be needing to rent a bigger Scout Hut than the gravely misled Pastor Jones, his former guru. While both (and millions like them) claim, sola scriptura, the authority of the Word, they are in fact claiming merely a personal authority to interpret God’s Word with no reference to the historic and living community of faith. It is little better than theological piracy and insupportable vanity. It is the rejection, all too often, of the teaching of the Church in favour of the cult of private opinion. In an age which has so comprehensively rejected traditional forms of authority and embraced the highest good as individual gratification, it is scarcely surprising that disintegration is gathering pace.