Holy Week and the Triduum was a marvelous experience for our Saint Patrick's community. I was unable to make it to Maundy Thursday observances because of a work commitment, but we shared that liturgy with Apostles' Church at their meetingplace. On Friday we had a joint Tenebrae service with South Elkhorn Christian Church. The liturgy was well done, and SECC has some friendly folks.

I was very pleased with our Easter Vigil; I'd spent a great deal of time practicing to chant the Exultet, and by the time I finished it, I thought I was going to pass out by the end of it, but happily I remembered to bend my knees a bit halfway through the 6 minute song. Here's an excerpt:

This is the night
when Jesus Christ broke the chains of death
and rose triumphant from the grave.

What good would life have been to us,
had Christ not come as our Redeemer?
Father, how wonderful your care for us!
How boundless your merciful love!
To ransom a slave you gave away your Son.

O happy fault,
O necessary sin of Adam,
which gained for us so great a Redeemer!

Most blessed of all nights,
chosen by God to see Christ rising from the dead!

I was honored and even humbled to lead our people into the Easter Vigil and celebration in this way. I spent part of Holy Week listening to Kallistos Ware's lectures on the meaning of the cross (scroll down the page for links), and one of hte things that occurred to me as I practiced is that many protestant Christians are - how can I put this - inappropriately sorry for the death of Christ. I've read some devotions regarding the execution of the Lord that speak as if it were entirely a terrible, terrible things, and really it would have been better if the whole thing could have been avoided. This is not true, of course, for the death of Christ was an extravagant act of love by God. We thank the God who so wonderously created, and more wonderously redeemed>!

This is a Western hymn, so I do find some of the theology a bit problematic. The song reads, "
For Christ has ransomed us with his blood,
and paid for us the price of Adam's sin to our eternal Father!"

To say that Christ paid the ransom to the devil brings us a place of theologizing about "the devil's rights" over humanity before God. That is deeply, deeply problematic, and it is an error made by some patristic writers (apparently) and many Pentecostals (obviously). To say that God was enslaving us and that he needed a ransom paid to himself does two problematic things: 1) it presents God as capricious and evil, because in such a conception it becomes God who keeps us enslaved to sin and death. 2) It places a wedge between Christ and the Father, and the redemptive work of Christ is depicted as something that he performs over against the Father. That's a problem. This is a mistake that some patristic writers made (apparently) and many Baptists make (obviously). 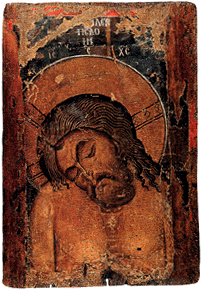 Christ in the Tomb

A Prayer for Holy Saturday

O faithful, come, let us behold our Life laid in a tomb to give life to those who dwell in tombs. Come, let us behold him in his sleep and cry out to him with the voice of the prophets: 'You are like a lion. Who shall arouse you, O King? Rise by your own power, O you who have given yourself up for us, O Lover of mankind.'

We await the Great Vigil.

On Choosing a Church

I read a wonderful bit of wisdom on Amy Welborn's blog today. Marcel Lejeune shared this on a comment thread:

A friend recently asked me what I “need from the Church”. My response boiled down to - I need the Church to make saints. Not in naming someone a saint, but rather in calling us all to holiness and perfection. Making modern-day saints out of the ordinary. We have a crisis in holiness in the Church. Holiness would solve every problem.

There is a great temptation to think about the work of the Church (caring, healing, celebrating and teaching) as equivalent to some kind of service industry or retail job. At the bookstore, I want the place, and particularly my religion section, to be the kind of place to which people will want to come and spend time and buy books. There is a needful and legitimate extent to which I have to think about what people want, and try to have that on offer. It's my job to sell books, and other concerns are secondary. I do have the opportunity to serve in some creative ways: there are a number of books in Joseph-Beth's selection that I make sure we carry, and do indeed sell, that you're not going to find in other places, and that we wouldn't have if I didn't put them there. If you want them, you will come into the shop and find good Christian books that are good for you. It will not be hard to find them. This is not true at chain stores or Christian bookstores (depending, of course, on who you trust to declare something "good.") Of course, you will also find Joel Osteen's stuff. I work for a "secular" business, not a confessional one. I don't go out of my way to get book that I think are bad for people just because I think they'll sell. But I don't try to prevent the stocking of titles that already sell. And of course if I'm indifferent about a title, I want to carry it if it will sell.

The work of the Church ought not to follow the same logic, however. "Give the people what they want" is a sound business practice and marketing strategy, but it is deadly to the life of any church that seeks to organize itself in such a fashion. The shape of the liturgy is not decided by popular vote, and we must not be interested in doing things because they are "neat." The Church has a reason to exist that comes before anybody else's agenda: it is the People of God, the new humanity that has been created in Jesus Christ to worship the Father along with Him, and to participate in the renewal of Creation in the power of the Spirit.

The Church doesn't exist in order to bring a large number to its Sunday gatherings for any reason, or to be "useful" in the social order or to split up responsibilities for poor folks with the government. The Church is called to give people Christ through the Sacraments, and Christ through their own presence in the dark and broken places of human life. The Church is called to mimic and extend Jesus' own ministry of healing, teaching, meal sharing and exorcism. That can look like all kinds of things, but the Church is not at liberty to make up activities unrelated to those things, and call it "ministry."

This is why it is dangerous to choose which group of Christians you'll make your life with on the basis of musical tastes, your "enjoyment" of the "worship experience," or the activities they put on offer. In most cases, those things will have very little to do with whether you can find healing and wholeness in Jesus Christ along with that community, or whether they are a people who can or will come alongside you to stay in the dark places of your life.

We need to be involved in communities that will participate actively in God's work of making us all saints - bringing us all to completion of who we really are.
Posted by Kyle at 9:45 AM 6 comments:

I had a good conversation with a friend yesterday about the teaching implicit in different liturgical styles. For example, in some churches, the "worship band" is illumined by stage lights in an otherwise dark auditorium. In the context of Christian worship, the implication is that the band are objects of veneration.

Seriously. Otherwise, why would it be important to see them? This is improper, and you should all stop it at once.

In other congregations, however, the worship band/music team/whathaveyou doesn't have a script. They don't talk. The entire congregation has a script it follows as it learns to talk to God the Father along with Jesus, who is the real "lead worshipper."

And of course, when my own parish meets in a place with fancy lights, we illumine the altar, because that is the dramatic focus of the entire movement. And yes, you may venerate it if you wish.
Posted by Kyle at 9:13 AM 4 comments: