Epiphany
Consider this my post for the feast of Epiphany. Heh.

Garrett asked me to weigh in on the Left Behind computer game last week. I downloaded the demo and was quite pleased with its campiness, but didn't get very far because 700-odd megabytes of RAM isn't enough for comfortable game play. And they don't make it for Mac, either. Guess they figure most of those folks will be Left Behind anyway, haha. Hippie liberals. 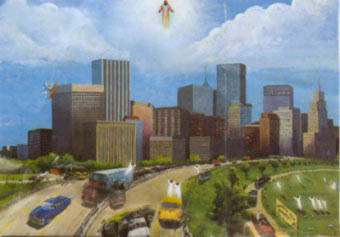 As far as the game's morality? It's atrocious. The post-rapture followers of Jesus must kill or convert as many people as they can in that world. I think it's pretty clear these folks have little idea of what "follower of Jesus" might actually mean, and that's all I've got to say about that. Noakes had a little fun with it a few months ago, read that here.

As most of you will know, I think the pseudo-Christian doctrine of the Rapture is a deviant position, and that the entire system of premillenial dispensationalism is heretical. It was developed and popularized in the last couple of hundred years by the emerging fundamentalist movement in Western Christianity. As I've said before, We can thank the Enlightenment and Scottish "Common Sense" philosophy for the Western (but mostly American) insistance on treating the Bible like it's a strange hybrid of a math book and Nostradamus' prophecies. It has never been a mainstream Christian belief - it's unfortunate that so many American Christians believe that anything popular in America is mainstream.

It's just bad, m'kay? Let me try to express why:
How might we read Revelation? It's a prophecy of the Lamb's victory against Caesar's empire, depicted in imaginative, traditionally apocalyptic language. As Barbara Rossing, author of The Rapture Exposed, puts it:

Revelation warns that the unsustainable, unjust practices of the empire will lead to its end. It's not so much a punishment as the consequences and logical end of its actions. The angel of the rivers cries out that this result is "axiomatic."

That axiom of judgment can serve as a warning, a wake-up call, for us to see the consequences of our actions, to get us on the path that God wants for us. The Bible's threats of judgment are meant to lead to repentance, not to a kind of predictive gloating by which one plans to escape and then watch the torments of others. That kind of voyeuristic violence is one of the worst features of the Left Behind series. The adherents of that view plan to watch the judgment, but they believe they're not going to suffer it.

God and the world are not far away from each other in biblical thought. Heaven and earth are not separated by a great gulf. A few years ago I wrote art for an American periodical called Bible Review, and I did one deconstructing the Left Behind nonsense, you know, the misreading of 1 Thessalonians 4, and I basically did an exegetical job on 1 Thess. 4 and said, “this is why you don’t read it this way.”

One letter in response said, “How does Mr. Wright think he’s going to get to heaven if he doesn’t get raptured?” I happened to be lecturing in a church in Grand Rapids shortly after that, and I asked the adult Sunday School class, “Is it true in this highly educated technological society, are there many people who still think heaven is a space within our cosmos located some distance up in the air?” And they said yes. I think we all know that‘s not right, but we’ve not tried to conceptualize what is right. Heaven and earth are the twin and interlocking spheres of Creation, of God’s good world. Together they are good, meant to interlock and impact upon one another. How that happens has always been deeply mysterious: in Genesis, they heard the Lord God walking in the cool of the day, looking for them. This is deeply mysterious… (link)

And from that article in Bible Review:

The American obsession with the second coming of Jesus — especially with distorted interpretations of it — continues unabated. Seen from my side of the Atlantic, the phenomenal success of the Left Behind books appears puzzling, even bizarre. Few in the U.K. hold the belief on which the popular series of novels is based: that there will be a literal “rapture” in which believers will be snatched up to heaven, leaving empty cars crashing on freeways and kids coming home from school only to find that their parents have been taken to be with Jesus while they have been “left behind.” This pseudo-theological version of Home Alone has reportedly frightened many children into some kind of (distorted) faith.
...
The Ascension of Jesus and the Second Coming are nevertheless vital Christian doctrines, and I don’t deny that I believe some future event will result in the personal presence of Jesus within God’s new creation. This is taught throughout the New Testament outside the Gospels. But this event won’t in any way resemble the Left Behind account.

Read the rest here or download as a .pdf here.

My argument is not that Rapture-philes are necessarily vindictive people, or that they are on the whole "bad Christians." I am arguing that
And yes, those are hefty charges.

Come back next time, when I'll discuss how the Rapture has replaced the Trinity, the Incarnation, and the creeds as a test of biblical and doctrinal orthodoxy within American Christianity.

It has begun... du du duuuuhhhhhhhh

I must say, I agree with most of the things here except that it is heretical. Isn't that a fairly strong word to be throwing around? What great essential of the faith are those who believe in a pre-millenial rapture discarding?

I think the whole thing is nonsense, but I don't think it's heretical. What do you mean when you use the word?

makes me miss the blogsphere.

and thanks again for your help yesterday. Seriously.

If you're interested I have just found out about a new book entitled "New Brothers Grimm: And Their Left Behind Fairy Tales" by David Morgan which was released late last year. I have a copy on order and will post a review when I've worked through it.

The rapture is an alternate eschatology. An eschatology that is mutually exclusive to the one that Christians have always believed: that Christ will return to restore the creation after judging the living and the dead. Jesus's inevitable return is something for which we ought to yearn, not so that he'll punish the evil-doers, but so that he will finally, and completely fix us and put to right everything that has been so wrong with the Universe. The eschatology that appears in the "Left Behind" series is, as Kyle rightly points out, one built on fear and hopes of revenge.

Heresy is a strong word, but it is appropriate in this case because of the destructive nature of a false eschatology. I will not call something simply "nonsense" if it can do as much damage as the rapture can.

That being said, I don't have anything against people who believe in the rapture; I just think that they are missing out, and would benefit from learning the truth about what Jesus is going to do when he does come back. The Truth really will set us free, not a rapture.

Ha, I expected Jesse to be more moderate than I on this one, but clearly I was wrong. :0) I think it's very well said, and the rapture does indeed represent an alternative end to the Christian story, one that doesn't seem to me to be in line with the scriptural witness on the whole.

Rob, I do consider premillenial dispensationalism a heresy because it teaches folks to use the bible in a way it ought not be used: as an oracle for the "future." That's not what prophesy on the whole is really about, and it leads people to do the wrong things in light of the Lord's return.

How do you think the behavior of a rapture believer differs from that of a Christian with a classical eschatology?

Or does it differ?

"This pseudo-theological version of Home Alone has reportedly frightened many children into some kind of (distorted) faith."

My best friend and I went to a church sleep-over party in 4th Grade, and they had us watch Thief in the Night, and we were scared of our parents disappearing on us for YEARS. As far as I know, she still is afraid.

It always annoys me when some people who are really into this premillenial dispensationalism stuff say that they are the only ones who take the Bible literally and everyone else who has another view on escatology is just a dirty liberal. One of my main problems with the whole dispy view of the end times is that I don't think that there really is much regard for what Scripture says. I think a lot of them rely more on some "end times prophet" says that the book of Revelation is saying. I can remember when I first started reading the Bible seriously for myself. When I came to the book of Revelation and I read it. I really didn't understand where they were getting some of their ideas from. Some of the dispy stuff I believed because I didn't really know any better. But their systems and outlines of how everything in the end times would pan out just never made sense to me. I guess that's why I never really got too into it.

One of my problems with the whole Rapture ideology is that it seems that what drives so many people to believe in this stuff isn't so much a literal reading of Scripture, but instead a devotion to whatever the current "end times prophet" has to say. What these guys do, seemingly, is to just take random verses out of the Bible, go through the newspaper, and, like someone operating an Ouiji board or a crystal ball, make "prophecy" and predictions of the future. This sort of thing seems to be abusing Scripture more than anything. Yet anyone who doesn't hold their view is a liberal who doesn't really believe the Bible. Right...

After searching for 'rapture' I also did another search...

Look what I found.

But I'm not disagreeing with you :)