...At the inmost core of the [Petrine] commission, which robs the forces of destruction of their power, is the grace of forgiveness. It constitutes the Church. The Church is founded upon forgiveness. Peter himself is a personal embodiment of this truth, for he is permitted to be the bearer of the keys after having stumbled, confessed, and received the grace of pardon. The Church is by nature the home of forgiveness, and it is thus that chaos is banished from within her. She is held together by forgiveness, and Peter is the perpetual living reminder of this reality: she is not a communion of the perfect but a communion of sinners who need and seek forgiveness. Behind the talk of authority, God's power appears as mercy and thus as the foundation stone of the Church; in the background we hear the word of the Lord: 'It is not the healthy who have need of the physician, but those who are ill; I have not come to call the righteous, but sinners.' 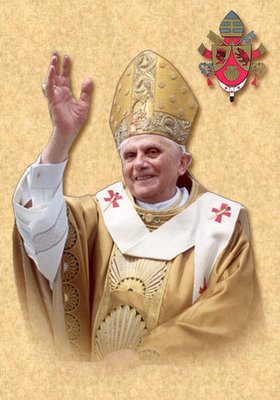 The community of the Risen Christ must be understood as a community of on-going resurrection, a people who continue to experience dying and new life in every aspect of their going, doing and being in the world. We are also a people who invite others into that experience, and it is in part for this purpose that the Church is given God's authority to give freedom.

Power in the Christian Community, in the economy of the coming and present Reign of God, works for the purpose of freeing and healing people, catching them up into the life of the Holy Trinity and the new Creation. This is what Benedict seems to draw out: we are given power to bind and loose in the realms of heaven and earth because we were slaves who have been and continually must be freed.

This commission was given to Peter in the context of both his deep failures and his weak but growing trust in Jesus. We exercise forgiveness out of our own present need and the continual grace we recieve. I would suggest that our power flows from the reality of that situation and our awareness of it. It's that kind of understanding that separates a Christian's exercise of godly authority from that of the world at large.

so, what's your take on the statement, kyle?

Hmm, that would make things a little more interesting, wouldn't it? Lemme hit the 'edit' button...

Eugene Peterson says that Pastors always forget that churches are made up of sinners (the pastor being the chief amongst us) and that this leads to all the angry, controlling machinations that pastors fall into. I think Peterson is on to something here.

I agree with what Fr. Peter said. In fact many who come to Christ are the weak, the broken, the lost, the misfits. It doesn't mean that we should not mature through discipleship, but we also should be ready to bear the weaknesses of others.

Bear with my weaknesses and blind spots, but if I am stuck and refuse to grow due to sloth or unwillingness to let go of some old sin kick me in the tail.

Maybe a stupid question here Kyle, but I assume that you are currently reading this book?

I finished it a couple of weeks ago. I really wanted to like it a lot, but I didn't that much. It didn't convince me of anything or particularly inspire me, just left me sort of blah overall. Partly I didn't connect with B-16's style (he seems to take was too many words to say very little).

Anyway, I'm glad to see that you are gleaning good stuff from it.

A - I don't think it's gonna be my favorite book, but it could be worse. I don't think he's convincing me of anything exactly, so I'd kind of like it if he made stronger arguments. But then, that's not the point of that book.

Peter+ and Tom - I agree, but one must always give place to reform and the quest to be more holy and more formed to the image of Christ in our lives together. Means we don't off on people in regard to what they "should" be all the time, but also that we don't just throw up our hands and give up on discipleship.

There's an abbot on the other side of the room who keeps saying thing about "systemic dysfunctions" ... ;0)