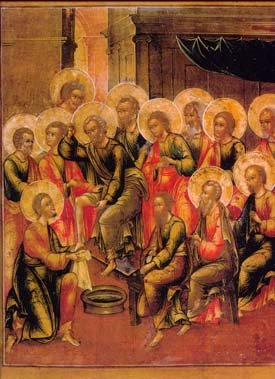 I've been gifted to preach at the footwashing tomorrow, so I wrote this dramatic monologue in lieu of a traditional sermon. +Dallas was even kind enough to lend his crozier for a prop!

(You can listen to the audio version here)

It is good to be with you. My name is Simon Peter. I lead the community here in Rome. We tell a lot of stories this time of year, to remember the death and new life of our King. We tell stories to learn who we are.

When we celebrate the Passover meal, we remember that we were created by God’s saving act. We who were slaves became a nation when Yahweh moved his mighty arm and delivered us from the hand of Pharaoh hundreds of years ago. We became his special people all over again thirty years ago when our Master Jesus became the Passover for us and by his resurrecton saved us from the darkness of sin. Many of you who were not of Israel became his because of this. We have been created by his saving act.

But tonight I want to tell you a story a little less grand, but no less important to who we are. It was our last Passover with Jesus on the night he was betrayed – by all of us. We gathered in an upper room to share the meal. Our feet had gotten dusty, and needed to be washed before we gathered at table. We were talking, cutting up and just enjoying being together. It had been a dark week, and we needed to celebrate. But then we suddenly quieted; we could have heard a feather hit the ground. Not many things can silence a room of rambunctious fishermen. I looked about to see what had happened. Jesus had taken off his robe and put on a towel. He filled a basin and began to wash our feet. We were completely speechless, and I was incensed. We had gathered to celebrate our identity as the free people of God, and he was doing what would have been disgraceful even for a slave!

He came to me, and I asked him just what he thought he was doing. “You don’t understand now,” he said, “but later, you will.” I refused him: “You’re never going to wash my feet!” He was patient and adamant as always. “If I don’t do this, you can’t be my disciple.”

I was shattered. I had spent three years of my life with this man, given up everything to follow him. But... if refusing this meant refusing him, clearly I had missed something. But I loved him, so I did the smartest thing I think I ever do: I obeyed, even though I didn’t understand.

As the rough hands of the carpenter cradled the rougher feet of this fisherman, I was struck by the tenderness of the act. Feet are very basic things, right? They’re just there. But as his fingers moved between my toes to wash, I was devastated by the intimacy. I began to understand. On that night in a little room in Jerusalem, just before all hell would break loose, this is what it meant to love us to the end. He was dedicated to me and to each of us. There were no lengths to which he would not go to love us, heal us, and set us free. This lowly service showed me the very heart of God.

He told us that this would be the pattern for our lives. This is a symbol of how he bears us up in all of our sins, failings and idiosyncrasies.

We remember this tonight. We confess our needs and submit to his washing—submit to his tenderness. We will leave and remember that our brothers and sisters have dusty feet also. We will wash them.

So in this story, learn who you are.

Let the Lord be with you in the weak places, in the dirt. Then go, take up your basin and towel, and be who you are.

In the name of Christ. Amen.

Wow. I think Simon Peter and I would've been friends.