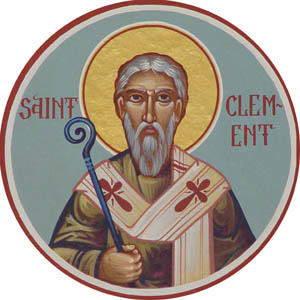 For this month's schola we read Clement's Epistle to the Corinthians, sent from the Church of Rome to the Church of Corinth around A.D. 96 to deal with another bout of factionalism there. Apparently a group of ascendant upstarts deposed that community's college of presbyters and took their place. What follows is a quick summary, and some reflections we discussed that I think to be germane to our present lives.

According to Clement, envy and jealousy had overshadowed the church's former virtuousness. He offers examples of righteous biblical personalities who suffered because of the jealousy of others, as well as those who have displayed humility and obedience, especially Jesus, Isaiah's suffering servant: “Christ belongs to the humble-minded, not to those who exalt themselves above his flock” (16:1). He calls them to repent, and demonstrate the Christian virtues of obedience, humility and hospitality. God desires peace, but that which comes from obedience, not control: “…Let us cleave to those who are peaceable in piety and not to those who desire peace in hypocrisy” (15:1). Those who through envy and jealousy have removed the leaders given them by God seek to create their own peace rather than submitting to his will.

I was struck by what Clement did not say: he fails to give a theological justification for unity. He will not even consider the validity of any disunity or factionalism, and calls their schism “abominable and unholy” (1:1) It is telling that he sees no need to justify this: any separation or division is already a failure of fraternal love, which “admits of no schisms” (49:5). As Paul, Clement takes for granted that commitment to Jesus is equivalent to commitment to the New Community – to falter in love for them is to falter in love of him.

It is disgraceful, beloved, very disgraceful, and unworthy of your training in Christ, to hear that the stable and ancient Church of the Corinthians, on account of one or two persons, should revolt against its presbyters. And this report has come not only to us, but also to those who are unconnected with us. The result is that blasphemies are brought upon the name of the Lord through your folly, and danger accrues for yourself. (47:6-7)

Clement clearly considers the community to be in dire straits, but he models a deep commitment to the community as such: he does not explore the possibility that the leaders of the coup could be excommunicated or punished. Instead, he still speaks of them as full and beloved members of the Body, indicating by his loving and grace-filled language that even such serious sins as these, done against the community, are not “deal breakers” in terms of life in Christ:

“Let us also intercede for those who fall into any transgression, that meekness and humility may be granted them, so that they may yield not to us but to God’s will. For in this way there will be for them a fruitful, perfect and compassionate remembrance with God and the saints. Let us receive correction, and not be angered by it, dearly beloved. The admonition which we give to one another is good and most beneficial, for it unites us to the will of God” (56:1-2).

Frankly, this kicks my tail. Like most other people, I like to push folks away when it gets too hard, too painful to find ways to love right there in the middle of whatever tough stuff is going on. But as long as there is a will to strive in community, so long as there is willingness to repent and "yield ... to God's will," no one may be forsaken. No sin in itself provides grounds for schism, only the refusal of repentance.

Read our reflection papers on Clement's Epistle at the Schola page.

Community. I think sometimes we view our relationship to the Church so childishly. Someone offends us in their sin or in our misconceptions...vice versa, and we gather up our bat and ball and run back into ourselves where it's safe and we don't have to hurt or be hurt.

But that's the funny thing about relationships...oriented in the Body or apart from. The hurt brings a beautiful healing, like you said, "as long as there is a will to strive in community, so long as there is willingness to repent and 'yield...to God's will'..."

Wounds, scars, sin all eventually heal the insides of us, and those around us that witness our healing. So, instead of "[pushing] folks away when it gets too hard, too painful to find ways to love right there in the middle of whatever tough stuff is going on" like I so desperately want to do sometimes, I want to become vulnerable enough in relational contexts to bring healing to others through my own brokenness.