An excerpt from one of my papers on the Great War...

For the largest part, vocal and popular bishops such as A.F. Winnington-Ingram of London were very influential as supplementary recruiting officers, inciting civilians to remain faithful to the noble cause at home, and for any eligible men to do their duty for God’s Kingdom by signing up to kill Germans for Jesus in France. He would also speak unequivocally of the moment of agonising, lonely death as rather a quick trip to the glorious hereafter. Certainly this lack of felt empathy with those suffering in the trenches in favour of easy religious patriotism further damaged the credibility of the Church of England in the eyes of many common people. She was seen not as a harbinger of God's Kingdom, but rather a cheerleader for imperial policy.

And a word from +Winnington-Ingram:

We are on the side of Christianity against anti-Christ. We are on the side of the New Testament which respects the weak, and honours treaties, and dies for its friends, and looks upon war as a regrettable necessity, and we are against the spirit that war is a good thing in itself, that the weak must go to the wall, and that might is right. It is a Holy War, and to fight in a Holy War is an honour. It uplifts life to be asked to do so. 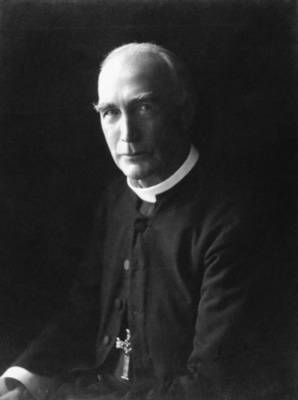 Technorati Tags: patriotism, history, World War One
Posted by Kyle at 8:43 AM